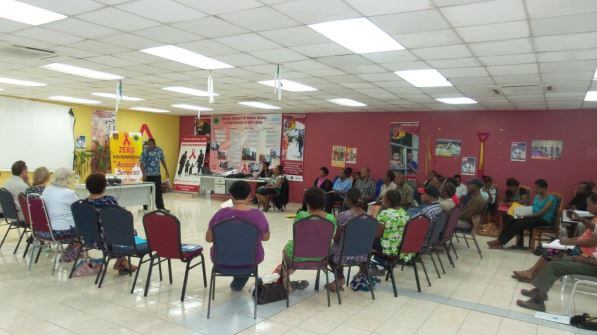 A NAPWHA-led one-day workshop on HIV treatments-related challenges faced by people living with HIV (PLHIV) has been conducted in Port Morseby on 20 May 2015, with aims to draw out the psychology of HIV treatment in Papua New Guinea (PNG). A similar workshop was later conducted in Lae, PNG’s second largest city in the Morobe Province, in October 2015.

In collaboration with the Igat Hope Incorporation, Dr John Rule from the NAPWHA and Ruth Hennessy, senior clinical psychologist at the Albion Centre in Sydney, facilitated the workshop.

The workshop was attended by 35 PLHIV and was held to help people meet their HIV treatment needs, understand the benefits of taking HIV antiretroviral treatment (ART), and identify the reasons why PLHIV were not taking their medications.

Dr Rule, who is also a conjoint lecturer at the School of Public Health and Community Medicine, UNSW, said that PLHIV in PNG faced a number of challenges in accessing and continuing on ART. Some situations are improving for PLHIV but further work is required.

The treatments-related challenges experienced by PLHIV in PNG include:

The workshop was timely as Igat Hope has begun to increase its advocacy around the psychology of compliance. Twelve PLHIV have been recruited at eight provincial hospitals as peer counsellors helping others on treatment regimens.

Hennessey said that the workshop was the first of its kind where PLHIV were able to talk openly about the challenges in accessing ART. “There are a lot of similar challenges faced by PLHIV around the country,” she said.

The workshop was funded by the Collaboration for Health in Papua New Guinea (CHPNG) an initiative supported by a number of pharmaceutical companies in Australia. NAPWHA works with PLHIV in PNG as part of CHPNG activities.