Not Guilty: Living with HIV and the law 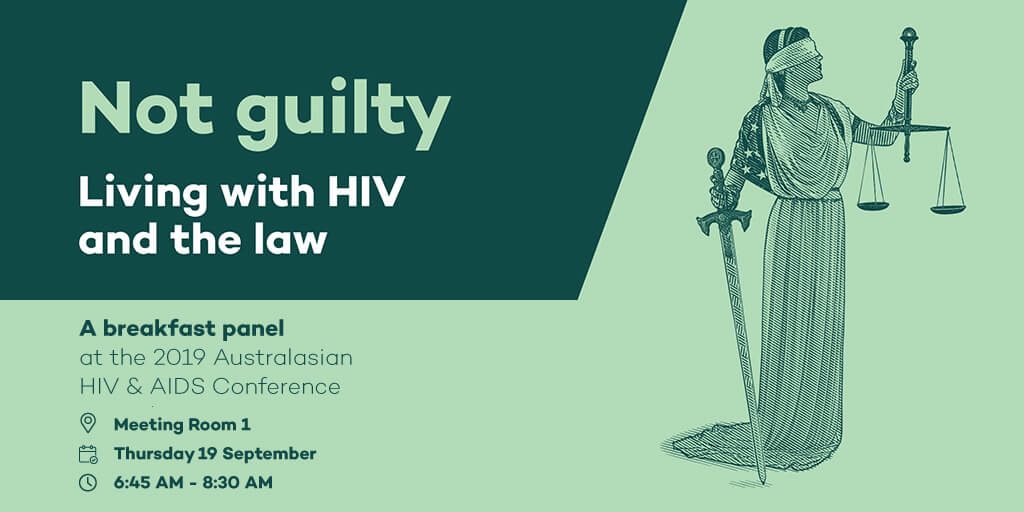 Join ‘Not Guilty: Living with HIV and the law’, NAPWHA’s breakfast panel supported by Gilead Sciences, an associated event of the 2019 Australasian HIV&AIDS Conference held in Perth, 6.30am – 8.30am on Thursday 19 September 2019. This breakfast discussion provides an opportunity for multi-disciplinary delegates to hear and gain insight and current information from leaders in the field working in the field of HIV criminalisation in Australia and the region. Evidence shows criminalisation does not reduce HIV transmission, and the resulting stigma and discrimination build higher barriers to effective health promotion. Current laws in certain Australian jurisdictions and in the region counteract the promotion of effective prevention and shared responsibility, and the uptake of HIV testing and treatment, and therefore undermine effective public health. In joining the breakfast panel, attendees can: 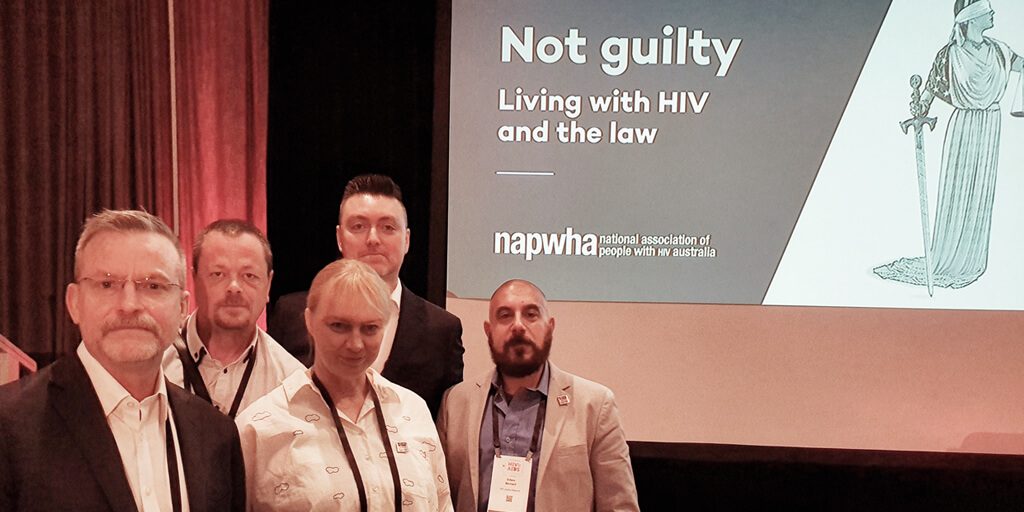 Hear from the panel of experts:

Registration to this free event is essential. A complimentary buffet breakfast will be provided. Capacity is limited to 80 people. PLHIV will be prioritised places to this event at the discretion of NAPWHA. To register your place at this session by email:  conference@ashm.org.au

There is a lack of scientific evidence, or policy rationale, for the mandatory testing of people who spit or bite emergency services personnel (including police officers) when there is no risk of HIV acquisition from biting or spitting.

A very recent audit of Australia’s mandatory testing laws, ‘The System is Broken‘, conducted and published by NAPWHA and the HIV Justice Network, stated:

“Fewer than 0.1% of the Australian population is living with HIV and HIV is not easily transmitted. There is no possibility of HIV transmission via contact with the saliva of an HIV positive person…and no possibility of HIV from where the HIV positive person’s saliva contains a significant quantity of blood and their blood comes into contact with a mucous membrane.” [1]

“Suggestions that police officers must wait up to six months to confirm an HIV status is incorrect. Modern sensitive tests can determine HIV status within weeks,” said Darryl O’Donnell the CEO of AFAO. “HIV cannot be transmitted through close familial contact.”

“It is cruel to force police officers to endure a completely unnecessary anxiety of waiting for the test results of individuals forcibly tested for HIV, when infection from that person is impossible. Further, any reassurance derived from the results of an HIV test imposed on an individual is illusory.”

Post Exposure Prophylaxis (PEP) is treatment for suspected HIV exposure that can prevent a person acquiring HIV. It must be initiated within 72 hours after HIV exposure. This means that where there is an actual risk of exposure confirmed by a health professional (and not the non-existent risk of exposure from spitting or biting), treatment must be commenced long before the results of a mandatory test can be obtained and regardless of the outcome of that test.

It is now clear that education to counteract misinformation about HIV transmission risk must be urgently provided to all emergency services personnel along with access to counselling where officers are concerned about transmission. In addition, appropriate Hepatitis A and B vaccinations; Post Exposure Prophylaxis (PEP) for HIV; and access to treatments that can cure Hepatitis C, will ensure that transmission of these blood borne viruses does not occur where there has been a real risk of transmission confirmed by a medical professional. Emergency services personnel should urgently be made aware of the realities of occupational exposure – that is, negligible to no risk of transmission – and the effective ways this has been managed in the clinical sector for many years.

“Most concerningly, in some states where these laws exist responsibility for ordering the test is delegated to law enforcement officers in the absence of a medical professional’s clinical opinion. Further, there is no mechanism to appeal the decision to enforce a test to a judge. This makes these laws vulnerable to misuse as a punishment that can be dispensed by police without legal or clinical oversight. Assaulting a police office is already a crime in Australia occasioning considerable penalties, appropriately overseen and dispensed by the courts. Medical tests should only ever be authorised by a medical professional and used only to benefit the patient. They should never be used as a punishment.”

The use of force by medical personnel to obtain blood is made legal by these laws. Forcibly testing an unwilling patient is not safe and has the potential to cause considerable harm to both parties. It is unethical to co-opt medical personnel into law enforcement and punishment processes. Medical professionals are compelled to help all of us regardless of the person or the situation.

“These laws do not benefit the emergency services officer or the individual subjected to the mandatory test. Instead they further harm both parties to an assault,” states Scott Harlum, President of NAPWHA. “There is no evidence, domestically or internationally, to substantiate mandatory testing as a strategy to deter individuals from spitting at, biting or assaulting law enforcement agents.”

In other states these laws are vulnerable to misuse against particular marginalised and disadvantaged communities, for example, homeless people, Aboriginal and Torres Strait Islander people and lesbian, gay, bisexual and trans (LGBT).

“These laws cast people living with HIV as dangerous and in need of control when, in reality, people with HIV have been extraordinarily successful at preventing onward transmission,” Mr Harlum continues.

The laws stigmatise PLHIV, and key HIV populations in NSW (and in other jurisdictions) – in particular, gay and bisexual men. This conflicts with the public health investment in HIV by successive NSW governments. Australian research shows that LGBT people delay seeking treatment out of a fear of discrimination or reduced quality of care and are more likely to be under-screened [2]. Further stigmatisation of these communities makes achieving the targets in the National HIV Strategy more difficult.

“For an already heavily stigmatised community such as people living with HIV, this will compound outdated perceptions on transmissions related to 30-year old notions of HIV and other blood-borne viruses.”

The eighth National HIV Strategy 2018 – 2022 (endorsed by the NSW Minister for Health) includes several guiding principles which include the meaningful involvement of people with HIV and affected communities in all decisions relating to the local and national response.

AFAO and NAPWHA have strongly raised the above concerns in correspondence to NSW Opposition Leader Jodi McKay and NSW Labor.

They urge the Minister to engage through urgent consultation with the communities most affected by this proposed legislation – including ACON, Positive Life NSW and other key agencies – to ensure HIV policy initiatives in this state are evidence based, informed by affected communities and in line with the NSW HIV Strategy and the eighth National HIV Strategy 2018-2022.