Since 2003, NAPWHA has had a proudly formative and long-standing partnership with Igat Hope in establishing and strengthening the capacity of a national, viable and incorporated association which represents on behalf of people living with HIV (PLHIV) throughout Papua New Guinea (PNG). Through the Collaboration of Health in PNG (CHPNG), a collaboration formed with PNG government agencies, PNG health services, Igat Hope and Australian NGO agencies — NAPWHA contributes to the capacity building of PLHIV and HIV health services in PNG through community health training, clinical mentorship,  advocacy and governance support.

Video: NAPWHA’s recent work in PNG include supporting the Igat Hope Third National Conference on the meaningful participation of people with PNG’s response to HIV (June 2018), overseeing production of a newly optimised Igat Hope website, and continuing to build the capacity of PLHIV through training, advocacy and research.

As our nearest neighbour and close regional partner, a stable and prosperous PNG is in Australia’s interest. The current HIV situation in Papua New Guinea (PNG) has recently been considered as a ‘mixed’ epidemic, because although its prevalence is significantly higher in key populations, it still affects large population groups that cannot be easily classified into these populations. The most recent projections estimated the national prevalence at 0.89%, with an estimated 47,795 people living with HIV in 2017. HIV prevalence within the country continues to vary geographically, with the Highlands Region and the National Capital District displaying the highest percentages, 1.10% and 1.64% respectively.

General elections were held in PNG from 24 June to 8 July 2017 leading to a considerable amount of unrest and violence throughout the country.

The most up-to-date information provided by the Catholic Church Health Services of PNG (CCHS) shows that in 2016 they recorded 1,307 new HIV registrations across all clinic sites. In the same year in the Highlands region, where most of the CHPNG clinical mentoring takes place, 851 new HIV registrations were recorded. 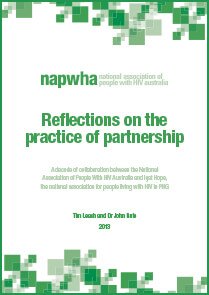 NAPWHA was initially developed by and for people living with HIV in Australia. At the beginning of the epidemic and through to the development of effective treatment responses in 1996 NAPWHA was focused specifically on work in Australia.

However, from the year 2000-onward when it became apparent that there was potentially a disastrous HIV epidemic emerging in the Asia-Pacific regional, NAPWHA became involved in regional programs with the Asian Pacific Network of Positive People and especially in Papua New Guinea (where there was a high HIV prevalence rate) and Timor-Leste (then a country with a low HIV prevalence rate).

NAPWHA’s earliest work with the PNG positive movement was unfunded, but with support from the Collaboration for Health in Papua New Guinea (CHPNG), NAPWHA was able to plan work in PNG in a more structured way with project activities which aimed to build the local capacity of the people of PNG in their response to HIV. Specifically, NAPWHA was able to provide strategic planning, governance training and peer support and induction activities for Igat Hope.

The CHPNG is a partnership which was established consisting relevant departments of the Government of PNG, the Catholic Church Health Services (CCHS) in PNG; and ASHM (Australasian Society for HIV, Viral Hepatitis & Sexual Health Medicine) and NAPWHA from Australia.

In 2013, NAPWHA published a report The Practice of Partnerships reflecting on a decade of collaboration between NAPWHA and Igat Hope — achievements resulting from both organisations working together towards shared goals in a spirit of mutual accountability. This report acknowledges the extraordinary efforts of people living with HIV in PNG and their supporters, especially their work in establishing an independent, viable and national representative organisation for PLHIV. NAPWHA hopes these individuals and other stakeholders will see their efforts reflected positively and accurately in this report. 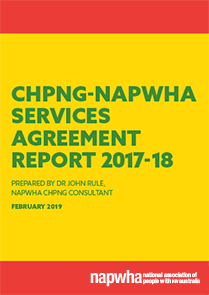 The most recent NAPWHA activities under CHPNG funding, are listed in its Service Agreement Report 2017-2018, including: 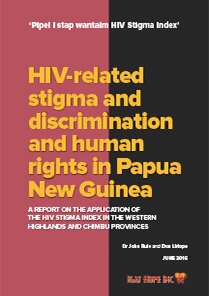 In 2016, NAPWHA published a major report released that contains research conducted on HIV stigma and discrimination in Papua New Guinea. Funded by PNG’s National AIDS Council, interviews were conducted in the Western Highlands and Chimbu provinces of the Pacific island. The data contained in the report provides information so that agencies and organisations can develop programs and responses to the vexed problems of stigma and discrimination face by positive people in PNG.

“This report is an extremely important document,” said Carol Kidu, member of PNG’s parliamentary committee on HIV. “I trust that serious note will be taken of this report and its recommendations and that it will be the beginning of more studies to build a repository of knowledge that will bring positive changes and reduce to zero our tolerance of stigma and discrimination.”

Authored by Dr John Rule and Don Liriope, the purpose of the report was to provide data on how stigma and discrimination create barriers to accessing services and how they impede the scaling-up of delivery of HIV treatment in PNG . “We also wanted to detail the levels of stigma faced by people living with HIV in different provinces and regions,” said Rule. “There are different experiences based on gender, sexuality or gender identity.”

The research contained in the report is the first step in what is hoped will be an ongoing project in PNG to fight the fear, shame and blame directed at PLHIV. “HIV does not kill people but stigma can kill and knowledge and compassion can prevent many unnecessary deaths,” said Kidu.