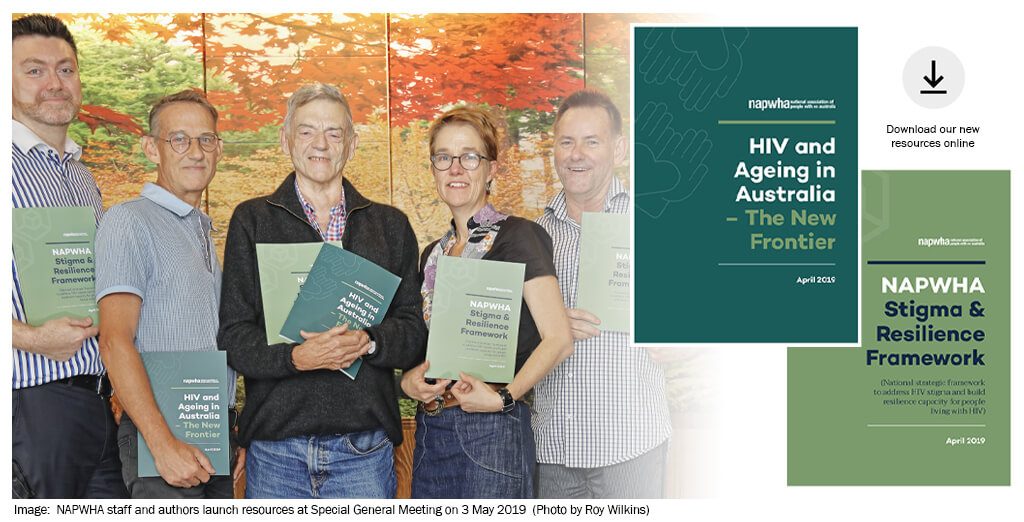 “NAPWHA is thrilled to have had the opportunity to lead the creation and development of this first ever national strategic framework to address HIV stigma and to build the resilience capacity of people living with HIV – and as such, it is a tremendously important document,” said Cipri Martinez, NAPWHA President in his foreword message of the NAPWHA Stigma and Resilience Framework.

The Framework is the outcome of a substantive consultation process across the community living with and affected by HIV. Recommendations for actions were drawn from several in-depth interviews with people who represent a broad diversity of backgrounds and HIV lived experiences – including Aboriginal and Torres Strait Islander people, people who inject drugs, transgender and gender diverse people, and people from mobile and/or migrant populations.

“We hope that the Framework will provide valuable guidance with a whole-of-sector approach to anyone involved at all levels of the HIV response,” said co-authors, Kirsten Machon and Brent Allen. “Ensuring and enabling people to not only live with HIV, keep well through accessing testing, treatment and care; but also to foster higher levels of psychosocial wellbeing, so that they live well and flourish – is the key end goal.”

The Framework provides encouragement for government decision makers and policy developers to pursue consistent and enabling policy and legislative environments to achieve best practice and stronger health outcomes, by utilising the interlinked twin goals of building personal resilience and eliminating stigma and discrimination.

HIV and Ageing in Australia – The New Frontier

“HIV and Ageing in Australia – The New Frontier is a seminal report by NAPWHA – providing a solid evidence base of the most current and comprehensive collation and review of international and Australian literature on HIV and ageing to-date,” says Dr John Rule, NAPWHA Senior Research Manager.

The life expectancy of Australians living with HIV has been steadily increasing and is approaching that of the general population. Many people living with HIV are already dealing with the changes and challenges of growing older, and many more will be doing so in coming decades.

“For people with HIV, and for community organisations that serve and represent them, living simultaneously with HIV and with the consequences of ageing is a new frontier,” said author, Ronald Woods.

Initiatives to promote successful ageing for people with HIV, including those that support treatment adherence, preserve health and delay disease progression, rely on having in place a strong service delivery framework.

For NAPWHA, this Report informs the next phases of our nationally focused work. Initiatives identified in the document include the development of peer training materials that focus on the intersection of living with HIV and living longer with HIV; and also, the promotion of models of geriatric care in Australia.

NAPWHA acknowledges the partial funding support from Queensland Positive People which led to the production of HIV and Ageing in Australia – The New Frontier. Direct feedback on earlier document drafts of the Report were provided by the Health Protection Policy Branch (Office of Health Protection), the Australian government Department of Health and Department of Social Services.