Monkeypox vaccines are being rolled out in Australia: What are they and what do you need to know?

The Minister for Health, Hon Mark Butler MP, has announced that Australia has secured 450,000 doses of the 3rd generation MPX vaccine, JYNNEOS®.  It is a vaccine administered in a 2-dose injection schedule with a minimum dose interval between doses of 28 days.

22,000 doses will arrive in the next few weeks with another 100,000 to arrive later in the year. The balance will arrive early in the new year. We are hopeful states and territories will be commence rolling out vaccinations before the end of the month.

Monkeypox (MXP) is a viral infection that does not spread easily between people and is usually associated with travel to Central or West Africa, where it is endemic. Cases of MPXV have been identified in several non-endemic countries in recent months, including several European countries and North America. It typically begins with influenza-like illness and swelling of the lymph nodes, then progresses to a widespread rash on the face and body. MPXV is usually a self-limited disease with the symptoms lasting from 2 to 4 weeks. Severe cases can occur.

Most people don’t require treatment for monkeypox and fully recover from the virus in a few weeks, while some may require simple pain medicines and oral fluids, with a health care professional monitoring their symptoms. People with monkeypox must isolate until their sores are fully clear, up to 21 days.

All but two of the 58 reported cases in Australia have been among travellers returning from overseas. Gay and bisexual men are at most risk of MPX, although it is not a sexually transmitted infection. For people considering this vaccine option – particularly those living with HIV, speaking with your doctor is advised. The doctor will discuss the risk-benefit assessment for individual vaccination, which is complex and depends on emerging epidemiology, exposure risk, contraindications and precautions, and alternative options to vaccination.

Dr Nick Medland, sexual health specialist, ASHM president and researcher at the Kirby Institute said: “We expect the outbreak will begin to slow after 75,000 members of our community have had one dose of the vaccine and may not be eliminated until 250,000 doses have been administered to those who need them most.

“We’re working closely with affected communities to ensure the health system is ready to deliver a safe and equitable vaccine rollout. We know from COVID-19 and from HIV that our responses to infectious diseases are only effective when clinicians work hand-in-hand with the people most affected.”

AFAO and ASHM are establishing a national MPX taskforce and NAPWHA’s ED, Aaron Cogle, will be our community representative.

People with HIV who believe they may be at risk of contracting MPX and are considering getting vaccinated, are advised to speak directly with their HIV s100 Prescriber – the doctor or specialist who prescribes HIV medication. 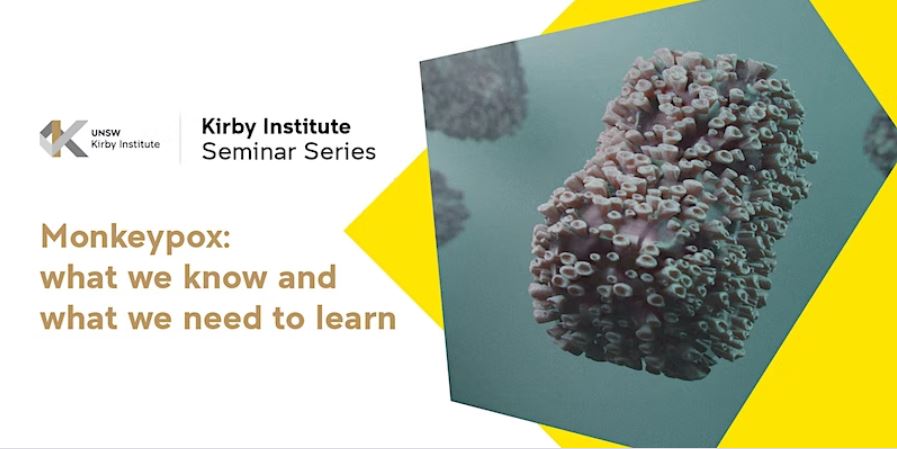 Monkeypox (MPX) has arrived in Australia, and strategies are urgently needed to curb its spread. While Australia has secured some third-generation smallpox vaccine, supply issues mean urgent consideration is needed as to how the vaccine is best distributed. And with men who have sex with men currently the most at risk group for MPX, non-stigmatising and community-led prevention programs will be crucial.

Please join us for a special webinar on MPX where we consider the history of the epidemic, how it may impact Australia, and how research can help. Collaborative, rigorous and timely research can uncover pragmatic solutions to the challenges posed by MPX, and there are many lessons that can be applied from the HIV and COVID-19 pandemics.

Prof. Raina MacIntyre is on the WHO SAGE smallpox and MPX working group, and will give an overview of prevention and treatment of orthopoxviruses. Prof. Andrew Grulich, a leader in Australia’s response to HIV, will provide a description of the current epidemic in Australia and the available public health responses. They will be joined by Mr Heath Paynter from AFAO who will talk about the community response to MPX in Australia.

If you miss out, a link to the recording of the webinar will be updated here.

Register to secure your spot

For people with HIV (PWHIV) in Australia the emergence of larger than usual outbreaks of the Monkeypox Virus (MPXV) around the world; most notably in Europe, Canada and in the USA, will be causing understandable anxiety.

There is a lack of available evidence about whether having HIV affects the risk of acquiring MPXV or if it affects the progression or severity of MPXV.

It is important to note, especially in the Australian context, that PLHIV should not be alarmed. There is no current evidence that PLHIV in Australia are at an elevated risk from MPXV. Immunocompromised people, such as those with very low CD4 cell counts, might be expected to have worse outcomes from MPXV infection than the general population but it should be noted that there is no evidence of this yet, either.

The situation in Australia is being closely monitored by health authorities. Case numbers are extremely low: there have been only two confirmed cases in Australia. Suspected cases are reportable to the public health units and public health staff will implement investigation, contact tracing and control measures where needed.

There are vaccines which confer protection against MPXV and there are also antiviral medications which can be used to treat the infection. Australia has a comprehensive universal healthcare system to provide appropriate diagnosis, treatment and care.

While a number of cases of MPXV in men who have sex with men (MSM) have now been reported globally, it is important to remember that sexuality is not a driver of MPXV infection. Anyone who has had close contact, or skin-to-skin contact, with a person with MPXV may be at risk. Read the Commonwealth Government factsheet on MPVX, its diagnosis, symptoms and transmission.

People who have recently returned from overseas who have been at dance parties, sex parties or sex-on-premises venues should be particularly vigilant, monitor for symptoms and see their doctor if they have concerns. For more information and a list of affected destinations, visit the Commonwealth Government Smart Traveler website.

Accordingly, PWHIV who have recently returned from places overseas where there are outbreaks of MPXV should be mindful of any potential history they have of possible exposure to MPXV. They should monitor for symptoms and see their doctor if they are concerned.

All PWHIV should do their best to adhere to their prescribed treatment regime, maintain continuity of care and sustain viral suppression where that is possible.

MPXV is a rare viral infection that does not spread easily between people and is usually associated with travel to Central or West Africa, where it is endemic. Cases of MPXV have been identified in several non-endemic countries in recent weeks, including several European countries and the United States. It typically begins with influenza-like illness and swelling of the lymph nodes, then progresses to a widespread rash on the face and body. MPXV is usually a self-limited disease with the symptoms lasting from 2 to 4 weeks. Severe cases can occur.

What are the symptoms of MPXV?

The incubation period (the time from infection to the onset of symptoms) of MPXV is usually 1-2 weeks days but can be up to 21 days.

Symptoms include a fever, headache, muscle aches, low energy, swollen lymph nodes and a skin rash or lesions (symptoms are similar to COVID or the flu). The rash usually begins within one to three days of the start of a fever, and tends to be more concentrated on the face, arms and legs. It can also be found on the mouth, genitals and eyes.

How is MPXV transmitted?

MPXV is transmitted through close physical contact with someone who has symptoms.

The rash, bodily fluids (such as fluid, pus or blood from skin lesions) and scabs are particularly infectious. Ulcers, lesions or sores in the mouth can also be infectious, meaning the virus can spread through saliva. Clothing, linens or objects that have come into contact with a person who has MPXV can also infect others.

MPXV has not been previously described as a sexually transmitted infection but it can spread in sexual networks through direct contact during sex or clothing and bedding used by someone with MPXV.

How is MPXV treated?

Most people with MPXV have a mild self-limiting illness and recover within a few weeks without specific treatment.

There are some therapies available for the treatment of MPXV, particularly for people at high-risk such as those who are immunosuppressed. Because MPXV is closely related to the virus that causes smallpox, the smallpox vaccine can protect people from getting MPXV. Vaccines may be indicated in persons at greatest risk of getting MPXV.

Am I at greater risk if I’m living with HIV?

There is very limited evidence on MPXV in people living with HIV, and most is based on research in countries where access to treatment is low, and experience far negative health outcomes than in Australia.

At the moment people living with HIV should follow the same advice as the general population. Should evidence emerge that people with supressed immune systems are at greater risk of MPXV, or ill-health from catching the virus, then updated information and advice will be made available.

Why are cases of MPXV being detected among gay, bisexual and men who have sex with men?

It’s important to note that the risk of MPXV is not limited to gay, bisexual and men who have sex with men. Anyone who has close contact with someone who is infectious is at risk. Stigmatising people because of a disease is never okay. Anyone can get or pass on MPXV regardless of their sexuality.

There have been no reports of any other cases so far.

Cases of MPXV have been identified in several other European countries.

People who have recently returned from overseas, have attended any dance parties, sex parties or saunas, especially in Europe, and who develop any symptoms, particularly an unusual rash, should seek medical advice immediately.

NSW Health recommends anyone who has been to the following events or venues in Europe to look out for symptoms:

If you have symptoms, contact your GP or local sexual health clinic by phone or telehealth or call the NSW Sexual Health Infolink on 1800 451 624.

If you have recently returned from overseas…

People who have recently returned from overseas, have attended any dance parties, sex parties or saunas – especially in Europe – and who develop any of these symptoms, particularly an unusual rash, should seek medical advice immediately.

Call the NSW Sexual Health Infolink on 1800 451 624 or call your GP or local sexual health clinic via phone or telehealth. Remember: do not attend a health service in the first instance – be sure to call first.

If you are planning to travel overseas…

If you are planning to travel overseas, it is important to stay informed and remain aware of developments. The situation with MPXV is changing rapidly.

Be aware and exercise caution if you plan to attend sex parties or SOPVs, particularly in places where there are identified cases of MPXV.

You can reduce your risk of contacting MPXV by:

As always, practice good hygiene, self-isolate if unwell and seek medical attention if you develop any symptoms.

NAPWHA is continuing to monitor developments and will provide updates to our communities as the situation evolves.

Where can I get more information?

Here are some sources of information: