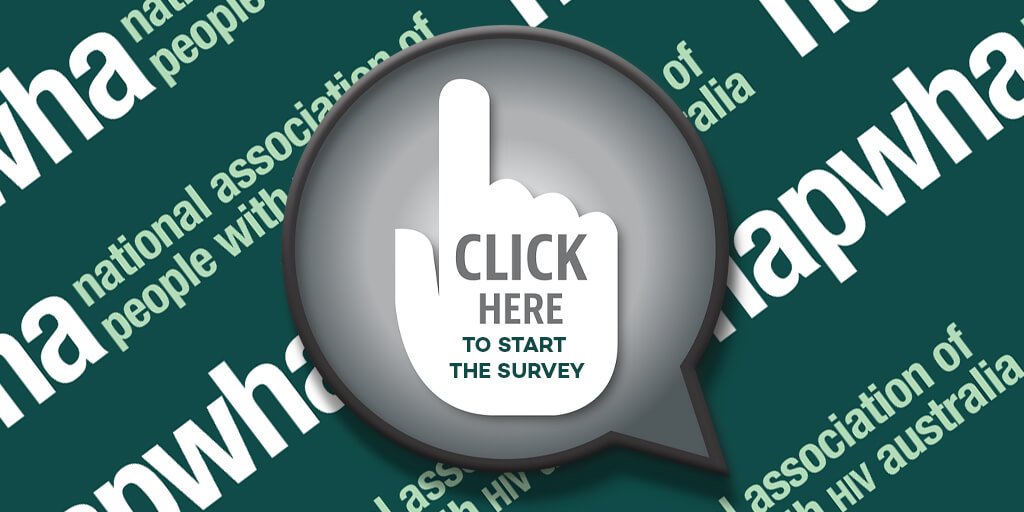 NAPWHA is undertaking a brief survey of People Living with HIV in Australia so that we are better able to provide support and services in the response to COVID-19.

We thank you for taking a couple of minutes to complete this survey. If you are unable to click the link, please copy and paste the full URL below into your browser:
https://www.surveymonkey.com/r/NAPWHA_COVID-19_PLHIV

This survey will close on 8 April 2020. If you have any further questions, please don’t hesitate to reach out to us at info@napwha.org.au
START THE SURVEY 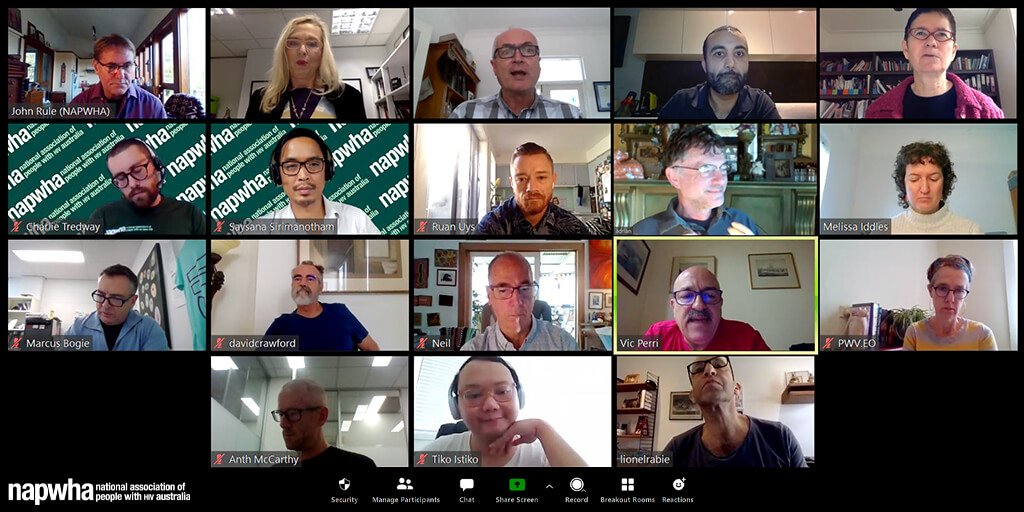 NAPWHA’s Treatment Outreach Network – a membership of professionals from Australian State and Territory peer-based organisations and AIDS Councils, held their annual formal meeting via video conferencing during this time of COVID-19 restrictions.

Hosted and facilitated by NAPWHA, the network work together to optimise the overall wellbeing of people living with HIV (PLHIV) and those affected by HIV, by providing a high standard of information and care on issues of health and treatments for HIV.

Two video conference calls were held on 8 and 15 April 2020 to hold initial roundtable discussion regarding disruptions to frontline services and responses to the impact of COVID19. A third video call hosted various presenters speaking on themed subjects, including Dr Elizabeth Crock, Vikas Parwani, Dr Darren Russell, and Associate Professor Edwina Wright. Video recordings of these sessions are featured below.

Vikas Parwani (Solicitor of The HIV/AIDS Legal Centre – HALC) provided members with a presentation on the delivery of current information on welfare service supports.

Dr Darren Russell (Director of Sexual Health, Cairns Hospital) provided members a presentation and Q&A about clinical supports that are being put into place to enable people living with HIV (PLHIV) to better access services and understand the current situation in relation to COVID-19.

Current data on COVID-19 and how it applies to PLHIV

Associate Professor Edwina Wright (Head of HIV Prevention Service, Department of Infectious Diseases, Alfred Hospital and Central Clinical School, Monash University) provided members a presentation and Q&A about the most current data on COVID-19 and how it applies to PLHIV, their treatment and long-term health.

Edwina is the Chair of ASHM’s Taskforce on BBVs, Sexual Health and COVID-19 was established on 20 March 2020. It provides a timely opportunity for the BBV and sexual health sectors to discuss the scientific, clinical, BBV and sexual health service delivery and social implications of COVID-19, and provides consistent and evidence-based messaging to the health workforce, sector partners and community.

About the NAPWHA Treatment Outreach Network

The Treatment Outreach Network (TON) is a network of professionals working together to optimise the overall wellbeing of people living with HIV (PLHIV) and those affected by HIV, by providing a high standard of information and care on issues of health and treatments for HIV.

The membership of Treatments Officers throughout Australia and New Zealand, working for their State and Territory peer-based organisations and AIDS Councils are called together by NAPWHA under this program to provide peer support/navigation and to promote the sharing of information. The network meets formally once per year and informal communication occurs throughout the rest of the year to continue the work of the network.

Australia still has ample supplies of all HIV medications

The pharmaceutical companies who provide antiretroviral medications in Australia would like to reassure people living with HIV (PLHIV) that there are still healthy supplies of HIV treatments in the country. What’s more, they do not anticipate any disruption to supply in the near future.

PLHIV are encouraged to keep ordering their medications as usual and to keep taking them as prescribed. People with HIV should not skip doses or share medication with friends who are worried about their own supply.

In order to avoid going out, PLHIV can now have their HIV treatments posted to them at home by asking their doctor to forward scripts directly to the pharmacy (by email or fax).

PLHIV are encouraged to request this postal service if it isn’t offered.

Any pharmacist can access free prepaid post bags by contacting Gilead Sciences in their Melbourne offices on (03) 9272 4400.

There are many PLHIV who are residents in Australia but are not eligible for a Medicare card and so are unable to access subsidised HIV treatments through the Pharmaceutical Benefits Scheme (PBS).

Some of these PLHIV are on Temporary Visas and return to their home countries regularly to fill their HIV prescriptions. But this is impossible at the moment. Which is why Australian pharmaceutical companies have expanded their Compassionate Access Schemes to allow people who are stuck in the country to get access to HIV treatments.

PLHIV in this situation are encouraged to talk to any GP who specialises in HIV (an HIV s100 prescriber) or any doctor at a Sexual Health Clinic. The doctor will contact the relevant pharmaceutical company who supplies the particular treatment and, if approved, will provide them with two months supply free of charge. 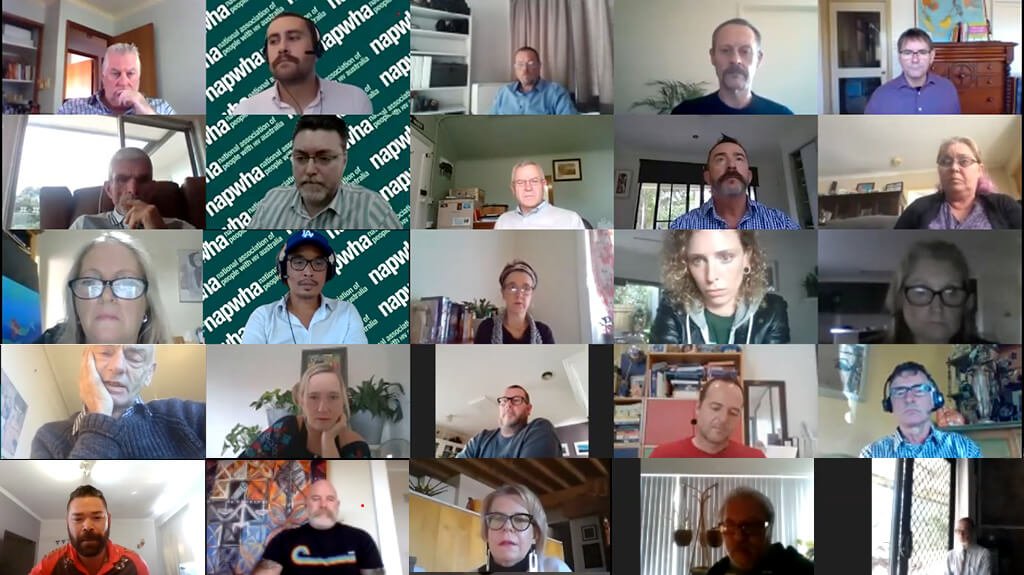 This year, the NAPWHA national forum of its membership met together in a one-day event, for the first time, physically distanced, each on our local Aboriginal lands, by video conference.

“Who could have imagined in October 2019, when we came together for the NAPWHA AGM in Sydney, the challenges of the months ahead for our organisations and our communities,” stated NAPWHA President, Scott Harlum in an opening address.

“COVID-19 has challenged us all. With these changed and rapidly changing times as our backdrop, it is timely that the network of community organisations representing people with HIV who come together under the banner of NAPWHA membership do so for our annual member’s forum for 2020.”

State of the Association: ED Report

Aaron Cogle (NAPWHA Executive Director) presented on the State of the Association, including:

Scott Harlum (NAPWHA President) announced the Board election result of an Ordinary Director to serve on the NAPWHA Board of Directors.

“On behalf of the Board and the Association I thank each of the nominees for putting themselves forward for this election, and congratulate and welcome Michael Brown.”

This appointment goes until October 2020, at which time it will be recontested as a full term position in elections conducted in the lead up to the NAPWHA Annual General Meeting. 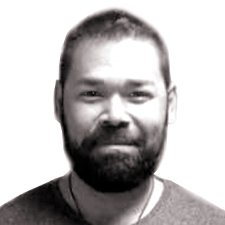 Michael is a Kalkadoon, Barada Barna, Wangi Man. Living in Cairns, Queensland. Michael has worked in alcohol and drug recovery and rehabilitation, homelessness, youth in care, disabilities and aged care. After his HIV diagnosis in 2016 Michael has worked as Indigenous Peer Navigator at Queensland Positive People, Health Worker and Peer on the HIV Response Team at Cairns Sexual Health Service and joined the Board of PATSIN (Positive Aboriginal and Torres Strait Islander Network).

Currently Michael is the Outreach Senior Health Promotion Officer, Sexual Health Educator at Wuchopperen Health Service Ltd working on improving knowledge, education and access to sexual health testing and treatment. He is a passionate peer and advocate for Aboriginal and Torres Strait islander peoples living with HIV and the improvement and implementation of culturally appropriate supports and services.

Referenced in this presentation:

Other parts of the meeting agenda consisted of:

Proposed laws to forcibly test prisoners for HIV have no basis in science, perpetuate stigma, and should be referred to a parliamentary committee, according to the WA AIDS Council and National Association for People with HIV Australia.

Under laws set to be introduced to the WA Parliament on Tuesday, a prisoner who assaults a prison officer will be immediately tested for HIV. The laws overlook the following critical facts:

“HIV thrives on stigma and misinformation. These laws inflame that problem and hinder our prevention efforts. Marginalised communities such as gay and bisexual men, people who inject drugs, and sex workers will be less likely to seek a test for HIV when they see it associated with criminality.

“Part of the case for these laws rests on the discomfort prison officers face when they are spat upon. However, HIV is not transmitted through saliva, destroying one of the key arguments for introducing this legislation.

“The Government has also argued a prison officer may face an anxious three month wait to know if they have contracted HIV. The truth is that modern tests pick up the presence of HIV within six days of exposure. Rapid tests provide highly accurate results within fifteen minutes.

“Frontline workers including prison officers need to know they’re being sold a lie and offered nothing but dangerous false reassurance by these proposed laws and any government promoting them.

“There is no mystery in how best to respond to a genuine potential exposure to HIV, such as a needlestick injury, and that does not include any time wasted or misdirected attention on anybody but the person potentially exposed.

“In cases where someone faces genuine potential exposure to HIV, such as a needlestick injury, post-exposure prophylaxis medicine is highly effective at preventing HIV transmission if taken as soon as possible and within 72 hours. Additionally, all frontline workers should be protected against hepatitis B through vaccination.

“These laws fail to solve any problem, and only hinder the HIV prevention effort. Likewise, there is no evidence mandatory testing of prisoners will do anything other than further marginalise those living with HIV and other blood borne viruses. Amplifying anxiety and misplaced fear around HIV is simply the wrong thing to do.”

Join us for CHINWAG: Positive Connection 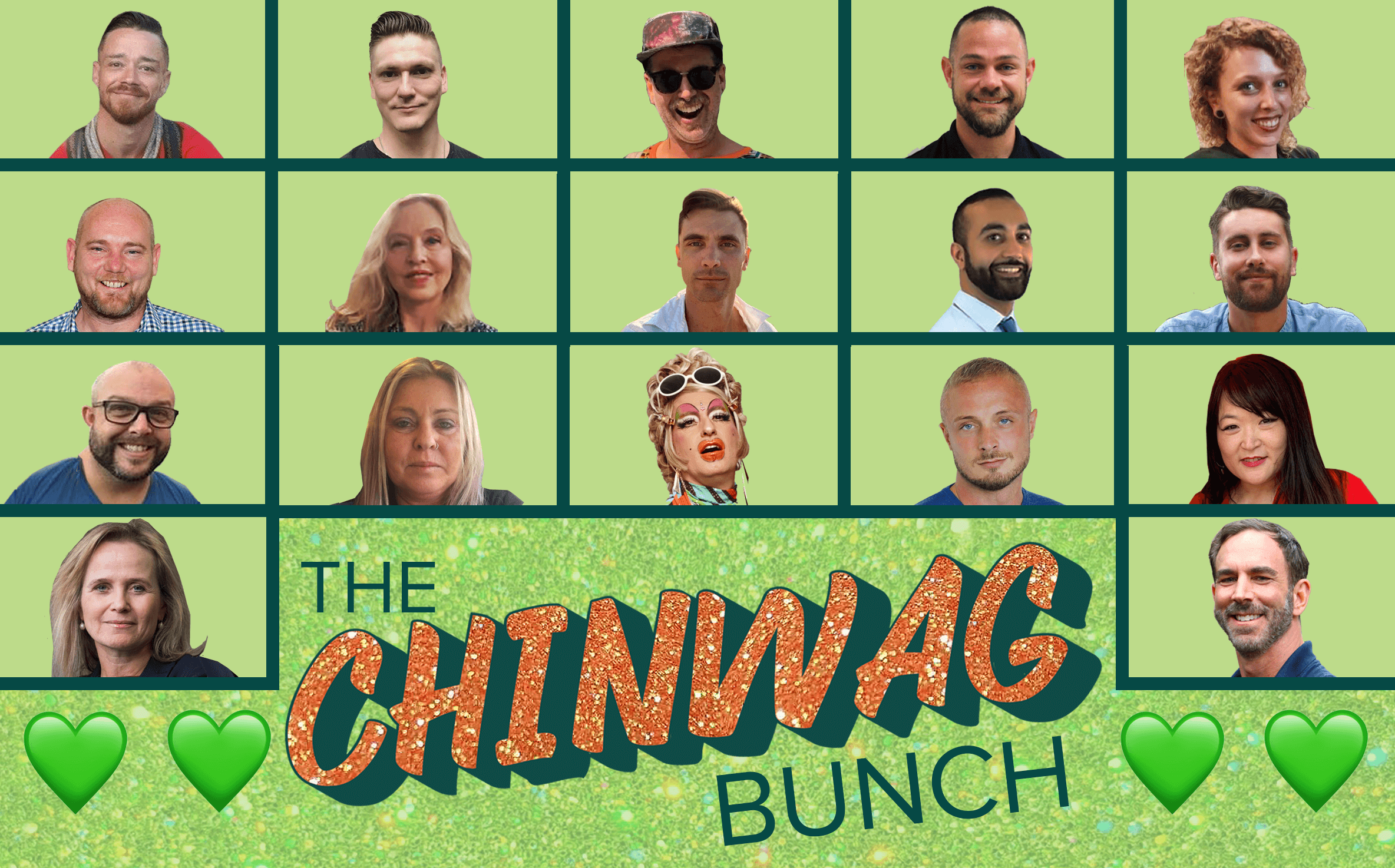 This is a safe, inclusive and dynamic virtual space where every Friday, for one hour, the ever fabulous Vanessa Wagner will be hosting a Zoom video conference event called CHINWAG: Positive Connection with a team of HIV Peer supporters.

CHINWAG: Positive Connection aims to create a fun space for people living with HIV to have a yarn, unwind and come together.

Over 12 weeks the series of events has been wildly popular exceeding all our hopes for the project and we are immensely grateful to you for spending your Friday evenings with us and creating such a warm, open and supportive space.

Chinwag would not have been possible without our incomparable host, along with an amazing stable of special guests, each of whom brought their expertise, passion, and generosity to the event, giving their time to help our community through COVID-19:

For any questions regarding this event, contact Charlie Tredway (Project Officer; Community Engagement) via email on charlie@napwha.org.au

We had incredible team of HIV peer supporters from across Australia join us each week to provide valuable lived experience, one-on-one support and linkage to care:

We also would like to thank ViiV Healthcare for their support to help bring this initiative to life. It has been an honour getting to spend this time with every single person who attended. 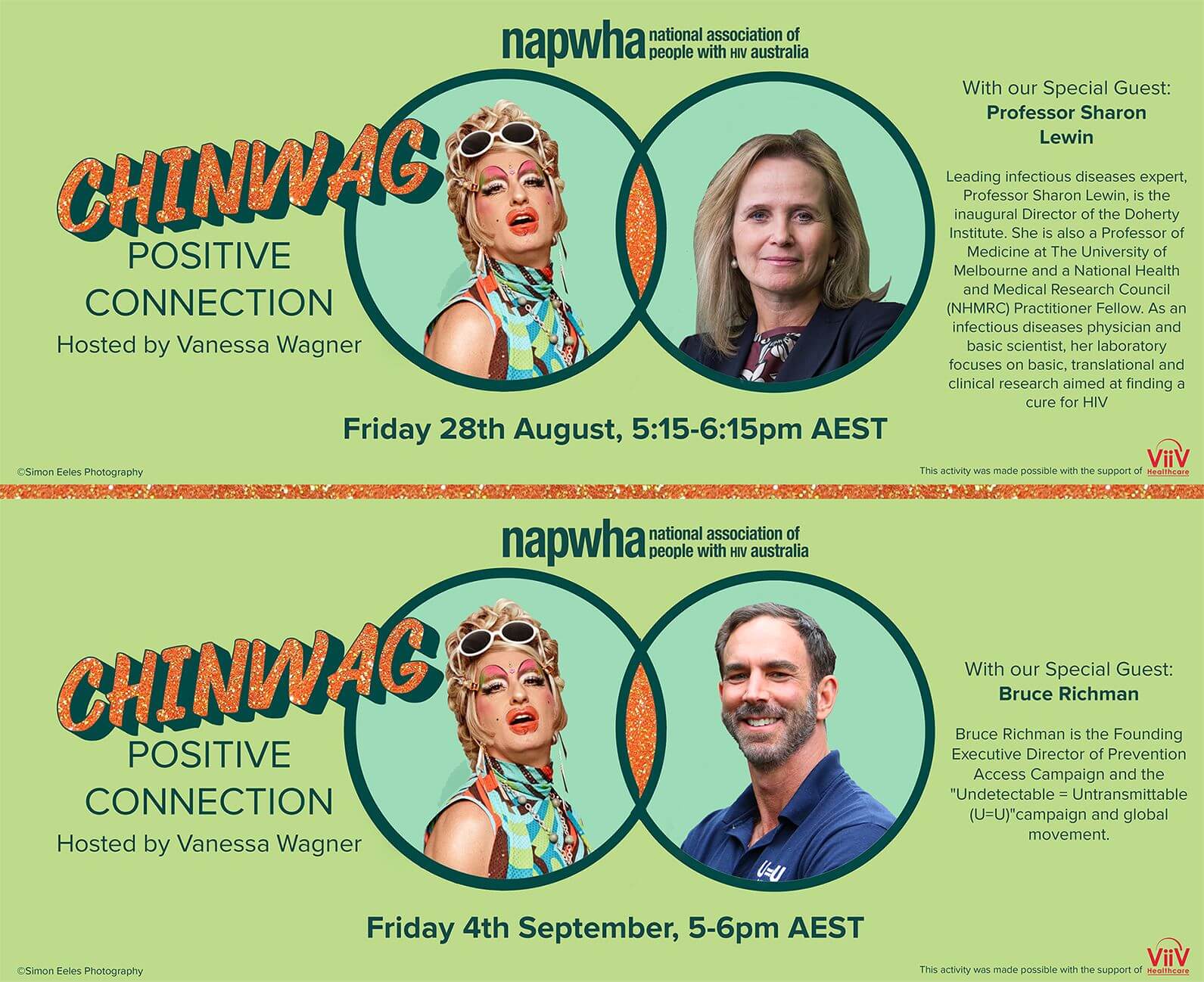 This is an initiative which is responding to a NAPWHA survey in April 2020 where we looked at the impact of COVID-19 on people living with HIV. From the 150 participants, the key things that stood out were the challenges of isolation and the need for meaningful interaction. 65% of participants selected Social Connection and 41% of participants chose Mental Health support as two of their most pressing needs right now.